Welcome to my blog

I'm John R. "Buck" Surdu. I have two Web pages that contain relatively static information about my professional life (including papers I've written) and my hobby life (including information about rules I've written and my wargaming projects). This blog is where I plan to post personal tidbits, like vacation pictures, wargaming projects, etc. Enjoy!

"Socialism is a philosophy of failure, the creed of ignorance, and the gospel of envy." -- Winston Churchill

"I think Congressmen should wear uniforms like NASCAR drivers so we could identify their corporate sponsors."

I ordered a bunch of compact tape measures to give to game masters at Barrage.  Today I made mockups of the tables that will be stuck to the two sides.  I think they will be a nice gift.

Over the past several months I have occasionally posted pictures of works in progress for the space ship I am building for Combat Patrol(TM) science fiction skirmish games.  After finishing up some additional “furniture,” I assembled what I have completed and took a couple of pictures.

I have been building rooms from Depron, which is essentially the foam stuff between cardboard in foam core board.  It cuts easily and glues with Tacky Glue.  The idea is to build a bunch of these boxes and then be able to assemble them in different configurations from game to game.  I haven’t determined what the basic deck of the ship will be made of on which these boxes will be arranged.  Greg has ordered a mat made from mouse pad material that might work.

The link above is to the warp core to my space ship.

I printed the doors on card stock.  I found glue sticks that are the kind of glue on post-it notes, so they can be removed and replaced at will.  The glue leaves no residue behind.  In the picture below, you can see what a door looks like when it is opened.  During a game I’ll be able to pull off the closed doors and replace them with opened doors at will.

Well, I figure it is about half completed.  I need to build the engine room, cargo hold, a few more rooms, and some weapon turrets.  It is starting to shape up, however.

I have begun to develop a version of Combat Patrol(TM) using the GAMER(TM) engine.  This will be for ancient, mediaeval, pike and shot, and similar periods.  There won’t be huge changes from the WWII version, but the changes will better enable the rules to reflect to differences between modern combat and earlier periods.  I have been tentatively calling this project Combat Patrol(TM): Dark Ages, but I don’t think that title is inclusive enough.

Development has begun with mocking up a sample Action Deck card.  I will create a couple decks of cards like this for play testing.  Once I am happy with the results, I’ll send the mockups to the artist I use in Canada to build the final cards.  Emmanuel did an excellent job on the original Combat Patrol(TM): WWII cards and also the South Pacific supplement cards.

The first historical period to feature these rules will likely be the Border Reiver period.  I am working with Greg Priebe on a Border Reiver campaign system.

Over the past week and a half, I have had lots going on, so I have been painting small projects that I could knock out quickly.  Here are pictures I took this evening of things I have finished recently.

It was kind of fun to do some figures in a uniform again.  This made the painting much faster than when every figure is an individual.  Of course, you have to like the figures on these figures.  🙂

When we needed to change the date of Barrage, Cliff Brunken and several of gamers in New Jersey who run NJ Con: Fire in the East suggested that we might host a smaller gaming day.  After discussions among the HAWKs we decided this was a good idea.  As this was meant to be a low-key event, we wanted to keep down costs.  We normally game at   Grove Presbyterian church for our Friday club nights.  As their church hall was available last weekend and there was no charge, we planned the gaming day.  The hall is large enough for six 6×10 tables, so that set the size of the day and necessarily limited the number of gamers.  There were 25 HAWKs there, three gamers from the Gettysburg / Frederick area, and five from New Jersey.  The HAWKs ran six games, and the gamers from New Jersey ran four.  Below are some pictures from the event.

I wasn’t sure I was going to have a chance to play something in the morning, but I had a chance to participate in Jamie Davis’ ever popular carpet race game that combines his excellent Future Race rules with Blood and Swash.

My magic carpet lost its magic, so I leapt onto a passing carpet to try to hijack it. My driver made it, but my number two man fell and died.

We had five gamers running in the morning with room for a sixth game if we had more gamers.  We broke for lunch and then ran five more games in the afternoon. 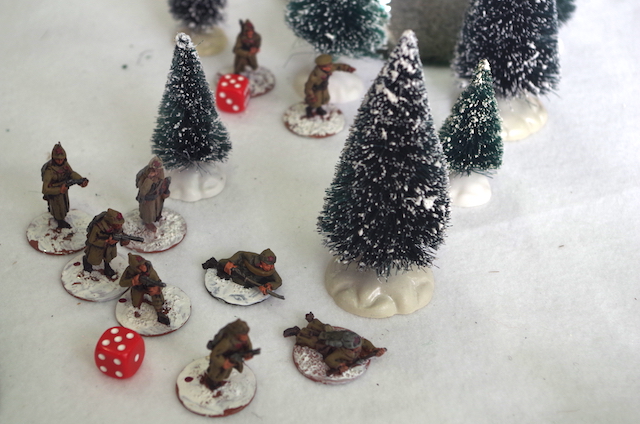 This was a very successful event.  We ran ten games and played from 0900 to 1800.  Everyone had a good time.  We kept it a low-key, low-stress event, focusing on playing games.  We are already starting to talk about another such event in the future.

After many months of development, we are happy to announce the release of the FREE Star Wars supplement for Combat Patrol(TM): World War II.  This supplement was written by Greg Priebe, a long-time Star Wars fan.  With this supplement, you can “recreate” your favorite skirmishes from the movies, television series, and comics.

This supplement uses the streamlined and intuitive mechanics of Combat Patrol(TM): World War II.  Cards are used, not just to control activation, but to resolve combat, conduct movement, check morale, etc.  There are not charts and tables to slow down the game.  You will find instructional videos and other free downloads on the rules’ web page.

This supplement, like almost all of the other supplements for Combat Patrol(TM): WWII, is FREE.   You do need to own the basic rules and cards to play the game.  The supplement is 26 pages of background, weapons stats, vehicle stats, rules for Jedi powers, and other material.  This is a free download from either the rules’ Web page or the Sally 4th Combat Patrol page.

To help you get started right away, we have provided a play through video demonstration of a Combat Patrol(TM) game using this supplement.  It is based on season 1, episode 1 of The Clone Wars in which Yoda and a handful of clones defeat a much larger droid force.  You will find a link to this video on the Combat Patrol Web page.   We think you will find this video — combined with all the other instructional videos on the Web page — is a good way to see the ease of play and intuitive mechanics of Combat Patrol(TM).

We have also pre-made the unit cards you will need for a platoon of clones, droids, rebels, and stormtroopers — including a small number of vehicles.  These, too are available for free download.  Just print them out and start playing.

If you have a box full of the old Star Wars collectable miniatures, or you are looking to play bigger battles than are possible with Imperial Assault, the Star Wars supplement for Combat Patrol(TM): WWII will allow you to do so.  We have used the rules (and this supplement) for games with as few as two players and as many as 10.

This is a fan publication, and it is free.  We are not attempting to infringe on any IP from Lucas Films or Disney.

Don’t forget to check out the play through video that is on the Web page.  You can also go directly to it at YouTube.

As a reminder, this is a supplement for Combat Patrol(TM): WWII.  You need the rules and cards to play the game.  There are a number of purchase options available.  You can order the sets of cards from DriveThru.  You can order starter sets from Sally 4th or On Military Matters.  Sally 4th sells individual Action Decks if you want to buy just one to try out the mechanics yourself.  Directions and links are on the rules Web page.

We hope you enjoy the supplement and enjoy the rules.  May the Force be with you, young Jedi.

Beyond Star Wars, Combat Patrol(TM): WWII is also a very good set of rules for WWII skirmishes.  On the Web page you will see many other supplements that extend the basic mechanics for other historical periods.

I created a video play through of a Combat Patrol(TM): WWII game using the soon-to-be-released Star Wars supplement.  Thanks for Greg and Chris for helping out.

I have not made any public announcements about the video, yet.  I will hit all the on-line fora with this when we are ready to announce the availability of the supplement, which should be not later than Friday.

For all three of you who read this blog, enjoy the sneak preview.