Welcome to my blog

I'm John R. "Buck" Surdu. I have two Web pages that contain relatively static information about my professional life (including papers I've written) and my hobby life (including information about rules I've written and my wargaming projects). This blog is where I plan to post personal tidbits, like vacation pictures, wargaming projects, etc. Enjoy!

"Socialism is a philosophy of failure, the creed of ignorance, and the gospel of envy." -- Winston Churchill

"I think Congressmen should wear uniforms like NASCAR drivers so we could identify their corporate sponsors." 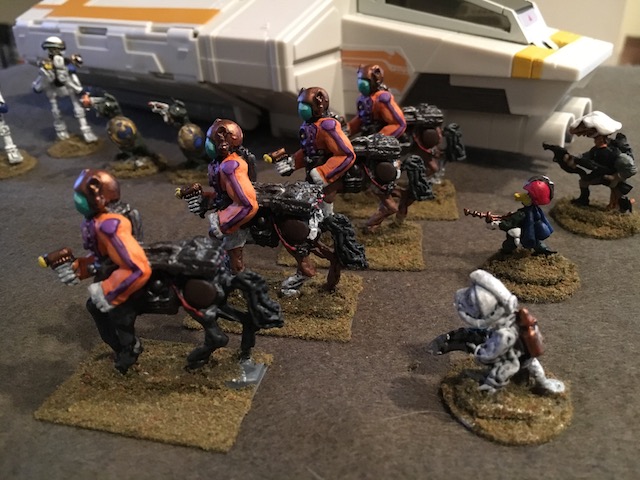 I was supposed to go play a war-game with some board gamers from where I used to work on Saturday evening, but Saturday morning I picked up some sort of cold / flu / upper respiratory bug that knocked me out.  All day Saturday and Sunday I would do something for an hour and then take a nap.  I don’t get ill very frequently, but when I do, it really saps my energy.  So, between naps, I worked on two more sets of figures from my buddy Mark Morin (see the link to his blog at the top of this page).

This set included space centaurs and Mk. III robots, both from Star Rovers, I believe.  I started by priming them in dark gray and then dry brushing them white.  For the Mk. III robots, I decided to do something a little different.  I typically paint my robots in 1930’s metallic, but I decided to go with a more Star Wars look of painted robots.

I decided to paint the horse portion of the space centaurs in a variety of colors.  I set out to make them look like Indian paint ponies, but there wasn’t enough horse showing to provide enough opportunity for variation, and the all started to look too similar.  so some of the centaurs became black, brown, and white.   I decided on an orange space suit for the human part of the space centaur.

In Combat Patrol(TM), I plan to allow the space centaurs two movement cards, rather than one, just like cavalry in the Napoleonic supplement.

As I mentioned earlier, I went with a  basically white paint scheme with just a few details.

Mk. III robots are organized into two teams (led by corporals) and a squad leader (a sergeant).

I have quite a large collection of out-of-produciton figures molded by Ma’k.  I just have one set left to paint — some anthropomorphic space bugs.